On 9 June 2021, AMOPA Irlande will have the honour to host a conversation with Son Excellence Vincent Guérend, Ambassador of France in Ireland. 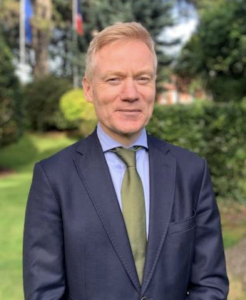 Vincent Guérend has held various positions related to European affairs and relations with Asia. He spent twelve years in the EU institutions (European Commission and European External Action Service). He served as Director of the Cabinet of the French Secretary of State for European Affairs and was Deputy Director of Cabinet of the EU Commissioner for External Relations. In Asia, he served as Ambassador of the EU to Indonesia and Brunei Darussalam. He was the first holder of the post of

Deputy Secretary General for Franco-German Cooperation. While working at the Directorate for European Cooperation at the French Ministry of Foreign Affairs, he was in charge of the internal market and the establishment of the euro, and of the negotiation of the Treaty of Nice during the French Presidency of the Council of the EU in 2000, among others.

Vincent Guérend is a former student of ENA and a graduate of the Paris Institute of Political Studies and Lyon School of Management. He was appointed Ambassador of France to Ireland on September 23, 2020. He was made Knight of the Légion d’Honneur in May 2021.

Vincent Guérend will talk about his role as Ambassador and the main action priorities of the French Embassy in Ireland.