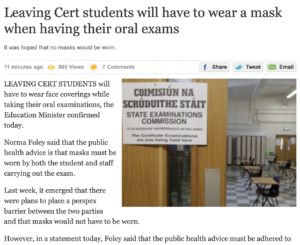 According to a supplementary circular issued by the Dept of Education & Science today (see circular below), Leaving Certificate candidates will have to wear a mask during their Leaving Cert oral exams which will run from Friday 29th Mar to April 16th. The Dept of Education and Science had previously issued a directive that perspex screens were to be erected between the interviewing teacher and the candidate but that masks were to be removed for the duration of the interview. This was met with widespread concern among Leaving Cert teachers who said that the Department’s instructions conflicted with public health guidelines.

The FTA, which had been in touch with the SEC to voice the concerns of its members, welcomes the announcement that masks will now be worn during the Oral examinations in Modern Languages.